The ancient name of the island of Skopelos was “Peparithos”, named after the brother of the first mythological settler of the island, Staphylos. The famous historian Stravo (63 B.C.-23 B.C.) mentions that Peparithos was one of the most important islands of the region.

Impressive finds from the tomb in the area of Staphylos were brought to light by archaeologists. Some of the most important finds are a golden sword handle as well as a double axe, proving that the island of Skopelos was inhabited during the Mycenaean times (16th-14th B.C.).

It is noteworthy that the place name “Staphylos” remained the same through the centuries, thus proving that the first settler of the island was the mythological “Staphylos”, who was the son of Dionysus and Ariadne, daughter of King Minoa. According to the Greek Historian DiodorusSiculus(80 B.C. – 20 B.C.), ancient Peparithos was a gift forStaphylos, prince of Crete at the time, by Rhadamanthus, son of Zeus and Europe. There used to be three cities in the ancient times in Skopelos. Remains of these cities can still be seen today. The most important citywas Peparithos, which ruled during these times and was a colony of the inhabitants of Chalkis. An impressive fact is that Peparithoshas been inhabited continuously since the ancient times. In the modern times we can admire the capital city of Skopelos, Chora. Significant personalities of the ancient times, such as the famous Olympic Games winner Agnon (6 B.C.), as well as the historian Diocles (3 B.C.) were born in ancient Peparithos.

Another important settlement was Panormos, at the location of the homonymous town today.

The third important ancient city was Selinous, located where the village of Loutraki is today, which is the picturesque seaport of the community of Glossa.

During the classical times, the Acropolis of Peparithos was fortified by a very strong and imposing wall, remnants of which can still be found at the location Kastro (Castle). An important historical event had catastrophic consequences for the beautiful island. More specifically, in 426 B.C., according to historical sources and references by Thucydides, a strong earthquake hit the areas of Northern Evvoia, Lokrida and the Northern Sporades. Then, a strong tidal wave followed, which led to the destruction of a large part of the fortification works of acropolis and of a relatively small number of homes. 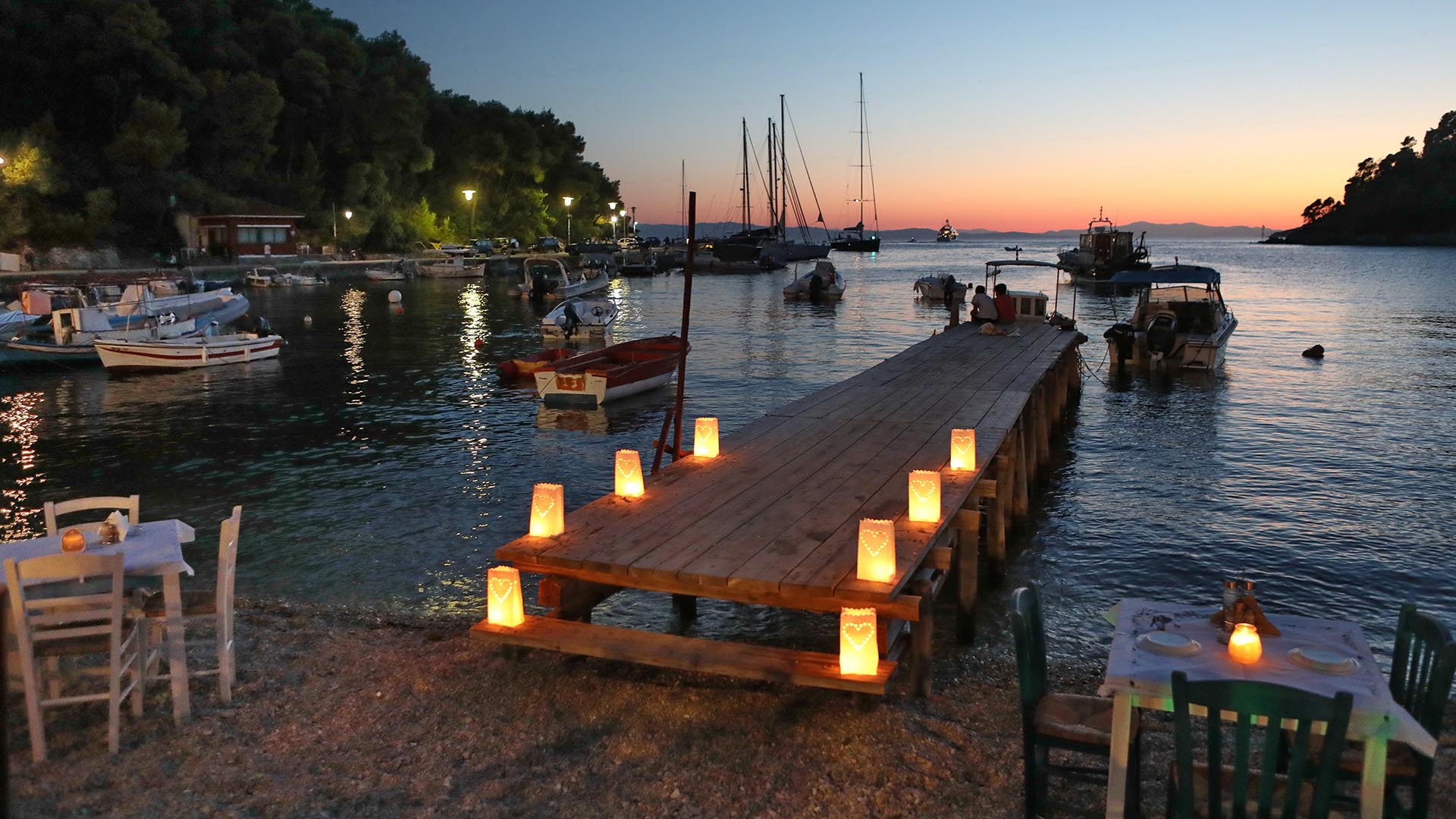 West and northwest of Kastro, located on high altitude, and specifically on the locations “KanakiLakka” and “Raches – Agios Konstantinos”, the visitor can see remnants of ancient walls, built in the ancient times to support the hillside ground. In this way, it was made possible to build structures, such as the temple of Athena and the temple of Dionysus. Dionysus used to be worshipped in ancient Peparithos, as demonstrated by the ancient coin themes of the area.

The end of the Peloponnesian War finds ancient Peparithos – modern day Skopelos – as well as other islands of the Northern Sporades under occupation by Spartans. After a short period, the Athenian general Chabriasonce again included the Northern Sporades in the so-called 2ndDelian League. Conflicts between the Athenians and King Philip II of Macedon erupted and therefore the islands of Northern Sporades were also involved, as they were close allies of Athens. According to Demosthenes, Philip II conquered Alonissos and the neighboring small island Kyra-Panagia, located northeastern of Alonissos, and then conquered Peparithos and the greater area. Important historical events unfolded in Peparithos and the other islands of the Northern Sporades during the Hellenistic (3rd – 1st c. B.C.) and the Roman period (1st – 4th c. A.D.), involving constant conflicts between Greeks and Romans. The consequence of the constant conflicts was that the Northern Sporades entered a period of economic downturn. It is noteworthy that there were short periods of growth, for example in 42 B.C., when,according to Roman historian Appian, the Roman Antonius encouraged the inclusion of the islands of Northern Sporades and other islands of the Aegean in the sphere of influence of the Athenians until the 2nd c. A.D.

The spread of Christianity in the Greek region in 4th c. had mass appeal in Peparithos – modern day Skopelos. A striking example is the personality and work of the first Bishop Saint Riginos of Skopelos.

The island of Peparithoshas been an important stop-over for shipping between Thessaly, the Black Sea and the coast of Minor Asia since ancient times, mentioned also in the mythologicalstories of theArgonautsand the TrojanWar. Furthermore, due to its favorable location and its natural port, Skopelos was a sought-after sea transport hub, connecting Northern and Southern Aegean Sea. Therefore, Skopelosbuilt a significant navy and commercial fleet through its long history, which transformed the island to an appreciable naval force in the Northern Aegean.

The ship owners of Peparithos were highly skilled and their commercial ships used to sail in the Eastern Mediterranean and the Black Sea. Moreover, the naval fleet of the island, comprised mainly of triremes, won many sea battles on the side of the Athenian navy. The commercial vessels of Peparithos played an important role historically in the growth of commerce and more specifically in exports of agricultural goods. The wine of Peparithoswas made froman exquisite and sought-after grape variety and was one of the most important export goods to the Black Sea countries, the Eastern Mediterranean and the market of Alexandria in Egypt. 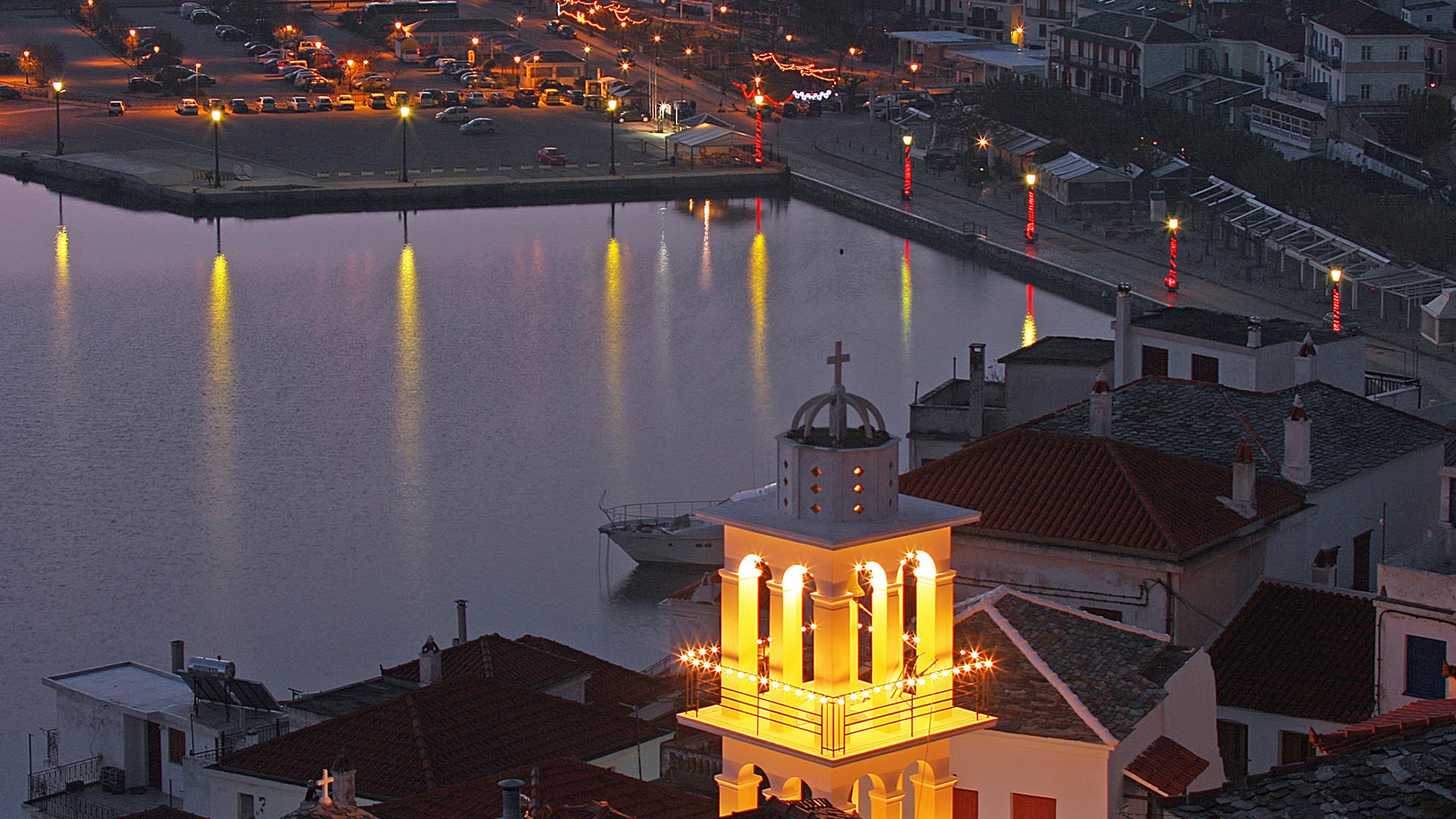 It is remarkable that the well-known Demosthenes mentions the famous wine of Peparithos, which was one of the main factors contributing to the economic growth of ancient Peparithos. Winemaking was mainly an agricultural activity of the inhabitants of ancient Peparithos, proven by the multiple references to winemaking by ancient writers and by coin themes of the era.Relevant archaeological finds established the locations of three winemaking facilities in the areas of Staphylos, Panormos and Agnontas. An impressive fact is that pottery workshops were located close to the winemaking establishments – two types of amphorae (vessels) were produced there and were used for storing and exporting wine.

Archaeological excavations in locations on the northern part of the Black Sea uncovered similar amphorae, thus confirming the references about winemaking in Skopelos by Demosthenes.

Another significant archaeological find is the discovery of a shipwreck a couple of years ago in the region around the small island of Peristera, east of Alonissos. In this shipwreck, amphorae were found, which were used for the trade and export of the wine of Peparithos in ancient times.

Ancient Selinous was the second most important ancient city in Peparithos, located in modern-day Loutraki, the port of Glossa. Selinous is mentioned in a votive inscription of the Roman period (2nd c. B.C.), dedicated to a deity. Selinous seems to have been established in 8th c. B.C. by the inhabitants of Chalkis, during the period of the second Greek colonization. The modern name of the town “Loutraki” seems to be a reference to the baths, which existed in the area in ancient times.

On the hill of Palaiokastro the acropolis of Selinous was built in classical times (5th – 4th c. B.C.) – part of the fortification walls are still visible today.

In the Roman era (1st – 4th c. A.D.), Selinous went through a period of economic growth. Archaeological excavations revealed that many public two-story buildings were built at the time, parts of which we can still visit and admire today among modern buildings. Multiple inscriptions, statues, anaglyphs and sarcophagi were uncovered, providing us with valuable information about daily life, traditions and burials.

At the location “Katakalou” on the southeastern side of Loutraki, there is part of a monument, an excellent example of architectural style of the Roman era from 3rd to 4th c. A.D.  This monument is a building including baths – it is not clear however whether these are public baths or private baths of a luxurious seaside villa.

The beautiful island of Skopelos is the capital of the Northern Sporades in the Municipality of Magnesia in the Region of Thessaly. The Church of the island is an administrative part of the Metropolis of Chalkis.

An extensive coastline of 67km characterizes the island, which extends to a surface of 95,8sq.km.  The island is characterized by verdant mountainous landscape – mountains Delphi (680m) and Palouki (560m) co-exist with the deep blue sea. 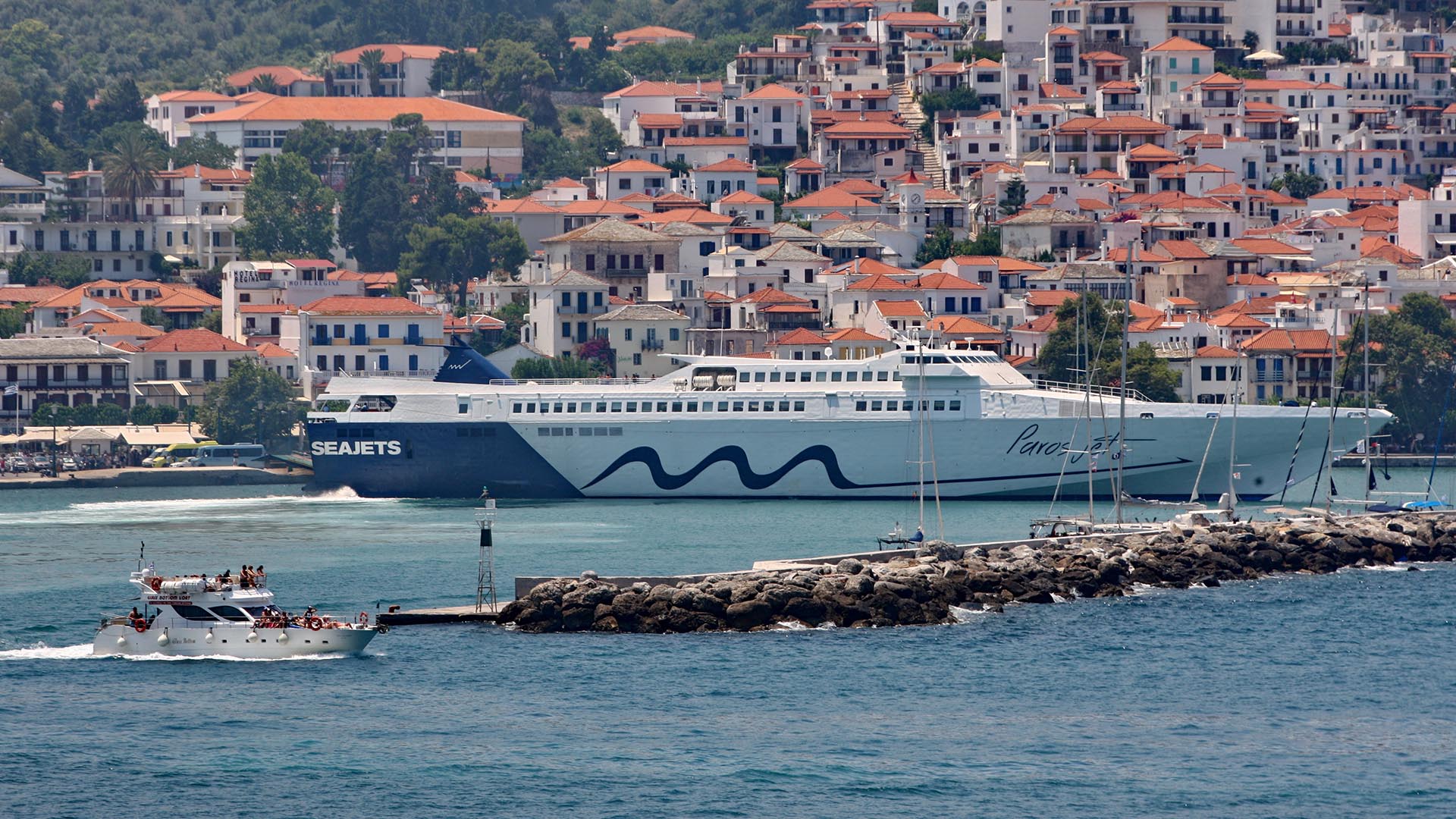 The island is famous for its pine-clad coasts, numerous bays and cliffs and blue-green waters. The bay of Skopelos is a beautiful location – there are also other bays, such as Agnontas in the southern part, where the second port of the island is. This is the port for passenger ships and yachts that flock to the island mainly in the summer months. The orientation of the island facilitates berthing of vessels under any weather conditions. For instance, when there is a strong northern wind, the vessels can dock on the southern part of the island, which is sheltered from extreme weather conditions.

Numerous charming capes can be seen in Skopelos, such as the renowned Gourouni cape on the northwestern side, Myti on the southwestern part, Velona in the south, Galipa and Kiourto, opposite the islet of Agios Georgios, Staphylos in the southeastern part, as well as other capes – Sarantakopo, Stavros and Kalogeropetra – on the northeastern coast of the island.

This beautiful panoramic image of the island is accompanied by a series of islets close to the coastline, such as Paximada, Agios Georgios, Stroggylo and Dasia, which seem to emerge from the emerald sea waters and create an amazing contrast.

The towns and villages of the island are hidden gems in this incredible verdant landscape. Visitors should definitely visit the picturesque Chora and Kastro, a landmark of the island, Glossa and its portLoutraki, as well as the charming villages of Palaio and NeoKlima (Elios)!